Babies in Church (part VIII): judge your mother, o child (the tragic necessity of the Reformation) 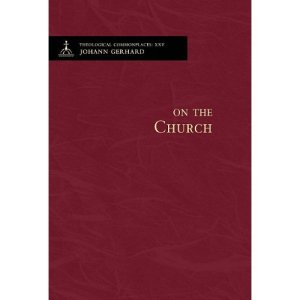 A quote from Gerhard’s On the Church struck me as tremendous, and has caused me to continue this series I started long ago… (at least for one addition : ) ).  I’ll get to the quote in a minute.

Recently, I read the words of one person describing a faithful Roman Catholic (here).  This is what he said:

“Your wish is to love what the Church does and as she does (I deliberately use the feminine pronoun); you wish to understand things as she does; and you wish to give a personal ‘fiat’ in the manner of the Mary of the Angelus and the saints. You see in the Church – the great, vast, aggregate of fallible humans – a spiritual work of a personal God manifest in the God-man Jesus; you take on wholly Paul’s metaphor that the church, in its human imperfection, is a sign and extension of that ‘scandal’, ‘folly’ and ‘stumbling block’ that was the ignominious death on Calvary. Thus, you can assert that the Church ‘belongs’ to Jesus in a sense that it is his work, and thus his, and you then would conclude that each and everyone professing to act for or in the interests of the Church should only do what is discerned as the heart and mind of Jesus, and that the only way to discern that is to contemplate on and assent to the teachings of its popes and councils.”

I am confident that these words could have been used to describe Martin Luther.  If you do not believe me, read this book.

At one point in the Luther movie of 2003 Staupitz, the head of the Augustinian order (and Luther’s faithful father in Christ) says to Luther: “I hoped that you would help reform the church, not destroy it…with all its sins, the Church is still the Church… what is a child without its family… how would people fare left to themselves helpless and frightened…all my life I have seen a world that hates evil more than it loves good… I beg you to look to the good, Martin…” .  To this Luther responds, “That day when you sent me out so boldly to change the world: Did you really think there wouldn’t be a cost?”

Luther never intended to leave the mother that had born him, but the words of Hosea 2:2 may have not been far from him: “Judge *your mother*, judge her, for she is not My wife and I am not her husband; let her put away her fornications and her adulteries from between her breasts”.  Such correction Rome could not endure.  He was as the faithful prophets before him.

Therefore, I conclude: although finally and fully loyal to the Father who provided the seed [of the Word], child-like faith also presumes a desire to stay with the mother that gave them that spiritual birth, that is Holy Mother Church.  Even when she abuses them tremendously, there is loyalty, for there is only One Mother, in addition to the One Lord, faith, and baptism…..

Here is the quote:

“Bellarmine… : “According to Philipp Melanchthon and [Matthias] Flacius Illyricus, the church at the time of Christ existed only in Zechariah, Anna, Simeon, Mary, and a few other devout people, but not in the pontiffs [i.e., chief priests] and a certain multitude of Jews.  Yet it is evident that Zechariah, Simeon, and the others communed with the chief priests in the temple and the sacrifices, etc.  Therefore either they were acting badly by being in fellowship with a false church, or the Lutherans are acting badly by not being in a fellowship with us and in not obeying the pontiff.”

(2)  If this argument were to have any strength, it would not prove that the church catholic [i.e. the universal church] is visible but that we should not have deserted the Roman Church.  But this question belongs to another place.  Therefore the argument is beside the point.

(4)  There is a difference between the Israelite and the Roman churches.  The chief priest in the church of Israel was divinely established; the Roman pontiff, however, does not enjoy such an establishment [I note: in the Lutheran Confessions it says that even if this were the case, the Pope would still need to be opposed insofar as he would not accept the doctrine of justification].  God had instituted the temple, the sacrifices, and the entire Jewish polity and had added the promise that these would endure until Christ came and that, before the Messiah came, the temple would be destroyed, the sacrifices abolished, and the Jewish government overthrown.  Despite this, the truly devout remained in the external fellowship of the Jewish church and used the same temple and sacrifices.***  One cannot show, however, as far as the Roman church is concerned, that it has the same promises nor that the church is bound to the city of Rome by a divine promise, as divine worship in the Old Testament was bound to the temple.

(5) In fact, just as Christians in the apostolic church after Christ’s ascent finally left the external fellowship of the Jewish church because the priests and Pharisees and the other Jews were banishing them from the synagogue and were plotting against their lives, so also we – impeded by the thunderbolt of excommunication from the Roman pontiff and driven out of the fellowship of the Roman church by the violence of persecutions – have departed from their communion, not so much fleeing from them as chased away.  If the confession of true doctrine and the legitimate use of the Sacraments had been left free for us, perhaps we would not have departed from the external fellowship of the Roman church.

(6) Just as God saved for Himself a holy seed in that utterly corrupt condition of the Israelite church when all things were seen to be filled with corruptions of doctrine, with idolatry, and with superstitions, so also God preserved for Himself a holy seed in later times when the papacy had spread far and wide, when all things were seen to be depraved and corrupted.  Still today in the very middle of Rome he gathers a church to Himself, a church that, though it has not yet been separated from the external fellowship of the Roman church, nevertheless does have an internal communion with the church catholic and in this respect is invisible.”

*** – “’The scribes and Pharisees sit in Moses’ seat; keep and do whatever they tell you to keep,’ says Christ in Matt. 23:2[-3].  He commands them to listen to the scribes and Pharisees not absolutely in all things but insofar as they sit in Moses’ seat, that is, insofar as they propose things that are in harmony with Moses’ teaching.  Elsewhere, He commands them to beware of their ‘leaven’, that is, of their false teaching (Matt. 16:11-12).  So, too, we should listen to the church, namely in those matters that are devout and holy and in harmony with the commandments of our heavenly Father.  If the church brings forth anything different from the teaching of Christ, to this extent and in this respect we should not listen to her.  (On the Church, p. 221, see also 201)… the scribes and Pharisees to whom Christ orders us to listen were mixing the ‘leaven of errors’ and corruptions with the pure teaching of Moses and the prophets.” (p. 226, bold mine)

Posted by Infanttheology on October 27, 2011 in Uncategorized

3 responses to “Babies in Church (part VIII): judge your mother, o child (the tragic necessity of the Reformation)”