RSS
← Confession: I am narrowminded
My issues with Issues ETC. →

Consumed by the Personal (Lutheran mysticism?)

Once in a while, lovers lose themselves in the other person.  They are consumed*.  In a like manner, there are times that children desperately want to be embraced, surrounded and smothered by a parent’s love.  This is a normal part of the human experience.

There also is a Divine corollary.  This morning, as I was listening to the book of Ephesians, I was again struck by the immense meaning in words like these:

“I keep asking that the God of our Lord Jesus Christ, the glorious Father, may give you the Spirit of wisdom and revelation, so that you may know him better.  I pray that the eyes of your heart may be enlightened in order that you may know the hope to which he has called you, the riches of his glorious inheritance in his holy people, and his incomparably great power for us who believe… I pray that out of his glorious riches he may strengthen you with power through his Spirit in your inner being, so that Christ may dwell in your hearts through faith. And I pray that you, being rooted and established in love, may have power, together with all the Lord’s holy people, to grasp how wide and long and high and deep is the love of Christ, and to know this love that surpasses knowledge —that you may be filled to the measure of all the fullness of God.  Now to him who is able to do immeasurably more than all we ask or imagine, according to his power that is at work within us…” (Eph. 1:17-19a, 3:16-20, NIV)

Huh.  Do I have any clue what Paul is talking about?  Note that Paul is writing this to Christians, so Christ already does dwell in their hearts by faith.  He is praying that they would know more of what they, in a very real sense, already have.  My mind was brought back to a 1998 song by the popular CCM group (heyday in 90s), DC Talk, called “Consume Me” (above, see the lyrics here).   Many years ago, and again this morning, I felt though the message in this song was my highest desire, and that which I hoped and longed for… 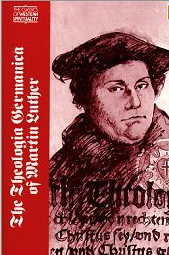 Are such thoughts really Christian?  What would Luther say?  Interestingly, near the beginning of his career as a Reformer, Martin Luther reprinted a couple of classical “mystical works”, one by Johannes Tauler (1300-1361) and another mid-14th century work that came to be known as the German Theology .  Before this second book was adopted by the Radical Reformers and the Pietists, Luther – even after publishing his 95 theses – said of it: “Next to the Bible and St. Augustine, no book has ever come into my hands from which I have learned more of God and Christ, and man and all things that are.”

If there is a valid expression of Christian mysticism though, what is its opposite?  It is to be consumed by the teachings of the one who comes disguised as an Angel of Light, who insists that we are consumed by the impersonal Reality that is Divine – that we are Divine.  Persons who believe this need to know the right teaching: man does not ascend to realize his Divine nature, but the Creator-God rather descends into His creatures in love, and this is clearly revealed in His Son and the words He speaks, which are spirit and life.

* “sin is about consumption, in which the good of life is taken and hoarded. The first sin, which was one of consumption, created a situation in which man could be restored to communion with God only by a different kind of consumption [i.e. Holy Communion]” – quote found here.

Posted by Infanttheology on July 17, 2012 in Uncategorized

← Confession: I am narrowminded
My issues with Issues ETC. →