Dangerous children: to the world or to the Word? 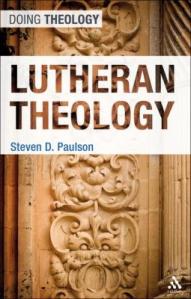 UPDATE: There is now a part 2 to this post.

`I forgive you’… Luther taught and demonstrated that these simple words give absolute, indubitable certainty, and no one is more dangerous than a person who is certain. The certainty was not based on human self-certainty; it was the opposite of that. It was the certainty of forgiveness because of what the Son of God did by taking the sins of the world upon himself and defeating them at the cross… (p. 7)

Amen to that!  But he then goes on to say:

“…The decisive cosmic battle of God against sin, death, and devil was already waged and won when Christ was raised from the dead to make a new kingdom of people who live with no law, nowhere to go, and nothing to accomplish. They were simply–free.” (7)

Now, I believe that we as God’s children are free indeed – to play and otherwise, but does this strike you as somehow a bit off?  As I have said before,

“Although God’s Law is the only consistent moral framework that exists which enables us to grow in our relationships with God and one another – albeit only when empowered by and freed by the Gospel of grace – have we not come to doubt just this?” and “From what, ultimately, have we been saved? Sin, or the Law of God? We have been freed from the Law, and are no longer under the Law.  But we have not been saved from the Law, for this we uphold and fulfill in Christ (Romans [3:31 and] 8:4).”

Is this just me refusing to embrace the radical Gospel as God has revealed it? (as Paul does in Romans 6:1).  I don’t think so.  In the conversation that resulted from the same blog post mentioned above, I had an interesting conversation with a gentleman who has visited this blog before.

This gentleman said: “God expects nothing of His children. That is the fundamental principle of the Gospel, probably best expressed in what Martin Luther wrote on his deathbed (cart?), ‘This is true, we are beggars all.'”

I responded: “Insofar as we are sinners, we need to be told that God expects us to follow His commandments. No? Not just that we ‘get to’, but that He expects us to, in His words, ‘make duty a pleasure.'”

He said: “… The relationship we have with our Father is not that we need to know what ‘He expects us to do’, but we need to know what His will is…. As soon as we think that ‘God expects something’, we have left the province of the Gospel. But as our Lord taught, even that will be forgiven.” (see the whole context here)

I said: “Not sure I really get the distinction. His will is that He expects love, no?”, and he replied: “No. HE IS LOVE. He expects nothing. Perfect love does not expect anything from anyone; perfect love only serves, as He Who took upon Himself the form of a Servant.”

To which I said: “…because God is love, He expects love from His children. He delights in making them into the kind of people who do love, and know the joy that comes through love. Insofar as we are sinners, we hate this and run from it. Insofar as we are saints, we delight and rejoice in it, for we desire to imitate our loving Father, and the Father of our Lord Jesus Christ, who revealed true love to us and made us the recipients of it. What a person needs to hear depends on the attitude we discern they have.”

I took notice when he quoted Luke 6: 35 (“But love your enemies, do good, and lend, expecting nothing in return. Your reward will be great, and you will be children of the Most High; for he is kind to the ungrateful and the wicked.”) and said “’Expect nothing in return’? That is how God loves.” (see the whole context here)

But then I thought a bit and replied:

“The problem with this here is that sinful man’s kind of expectations – i.e. “tit for tat” – are being contrasted with God’s way of doing things. God’s love – and hence His expectations – are more like that of a parent in their most selfless of moments, who desires the best for their child in life. To really love God and neighbor is to live in freedom, and God would have His trusting children to grow in this wonderful love. It should be good news to us that He expects us to grown in His love, loving His will (which He has indeed given us and we are always trying to catch up to, grow into) – the fact that it does not sound like good news to us – even after He has redeemed us – simply once again illustrates the extent to which sin inheres in us. I John 4:17 is a wonderful verse, but it is the ideal that we won’t reach until the other side of heaven.

I can’t imagine a parent not having some expectations – hopes – for their child. To not have expectations of a child does not sound like love to me, but disinterest, lack of concern, lack of love.”

The conversation is not over yet, but I’m not sure how long it can go on…  Augustine encouraged Christians with the radical words, “love God and do what you will.”  Dare we go any further than that?  We know that God ultimately takes the sinner out for the sake of the little ones. And we want to be on the side of the little ones!  We want to keep the faith.

Posted by Infanttheology on April 2, 2012 in Uncategorized

6 responses to “Dangerous children: to the world or to the Word?”